SALT TO FRESH AND BACK AGAIN

AFTER SUPPER, Tom and Julie wanted to spend time outside before bedtime. It was a warm evening, and there wasn’t much wind. As the sun went down slowly behind the trees to the west, the light faded. Fireflies started to wink and blink in the bushes at the edge of the lawn.

The kids and I sat on the edge of the deck and talked about the things we’d been doing together this week. Both Julie and Tom thought their boogie board rides on the ocean waves were the most fun. Digging for clams on the beach and sailing across the bay for a picnic also got a big thumbs-up.

Pretty soon we were surrounded by darkness. We lay back and looked into the star-filled sky. When I asked Julie and Tom if they knew what a constellation is, they said no, so I explained that it’s a collection of stars that people have given a name. The easiest constellation to find is the seven stars that make up the Big Dipper.

I showed them how to line up the last two stars at the dipper end of the Big Dipper, and follow them to find the North Star.

“It’s basically a cup with a long handle, sort of like a soup ladle,” I said. “People used to have to dip their drinking water out of a bucket, so they used a dipper.”

The Big Dipper is a constellation made up of seven stars. They make a shape like a water container with a handle. 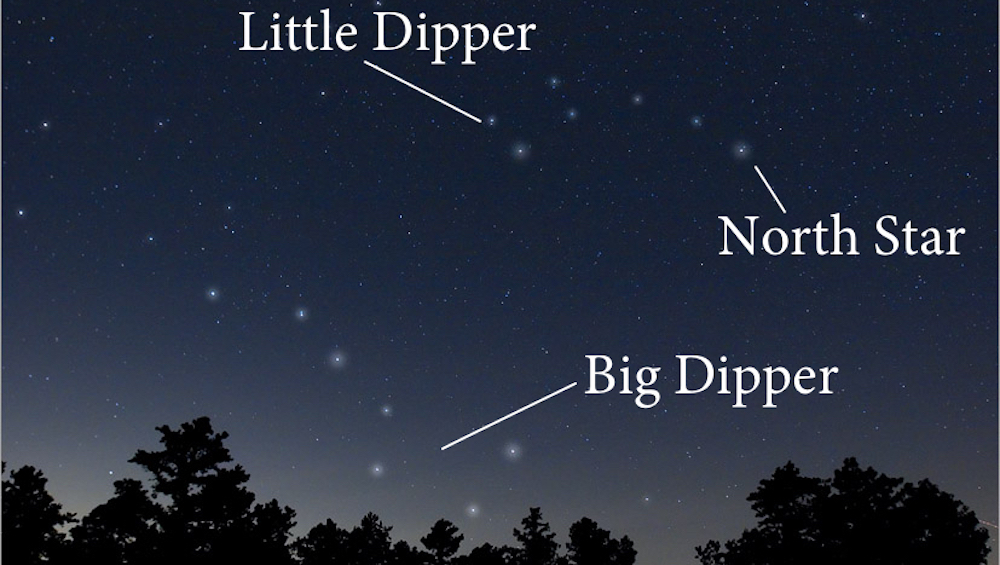 Tom already knew about the North Star. “That’s the star sailors used in the old days, to guide them when they were sailing across the ocean to America, right?”

“Yes,” I replied. “If you were sailing to America from England or North Africa, during the night you’d keep the North Star over your right shoulder.”

Julie sat up and looked over at me. “I wouldn’t want to be sailing across that big ocean in the dark!” she said with a shiver, moving a little closer to us.

“Maybe it’s time for bed,” I suggested. They were ready and headed for the bathroom, then up to the loft.

I’M LYING IN BED this morning, thinking about Tom and Julie. They’ve been staying with us for almost a week now, and I’m pretty sure they’re enjoying it here. Their parents will join us for the weekend, and I know the kids look forward to seeing them. But so far they don’t seem to be homesick.

I can hear Julie and Tom talking downstairs. Their excited voices float up the staircase, and Julie’s laugh bubbles up now and then, but it’s hard to tell what they’re saying. Finally my curiosity gets the best of me. I climb out of bed, put on my robe, and pad down to join them.

The two kids have come down from their loft. Julie is sitting at my table in front of the computer, with Tom looking over her shoulder at the screen. Coming into the room, I hear Julie say, “See, the water rises up from the ocean. Then it turns into clouds …”

She notices me out of the corner of her eye. “Hi, Gramps!” she says. “Check out my water cycle!”

“Water cycle? Is that anything like Tom’s carbon cycle?” 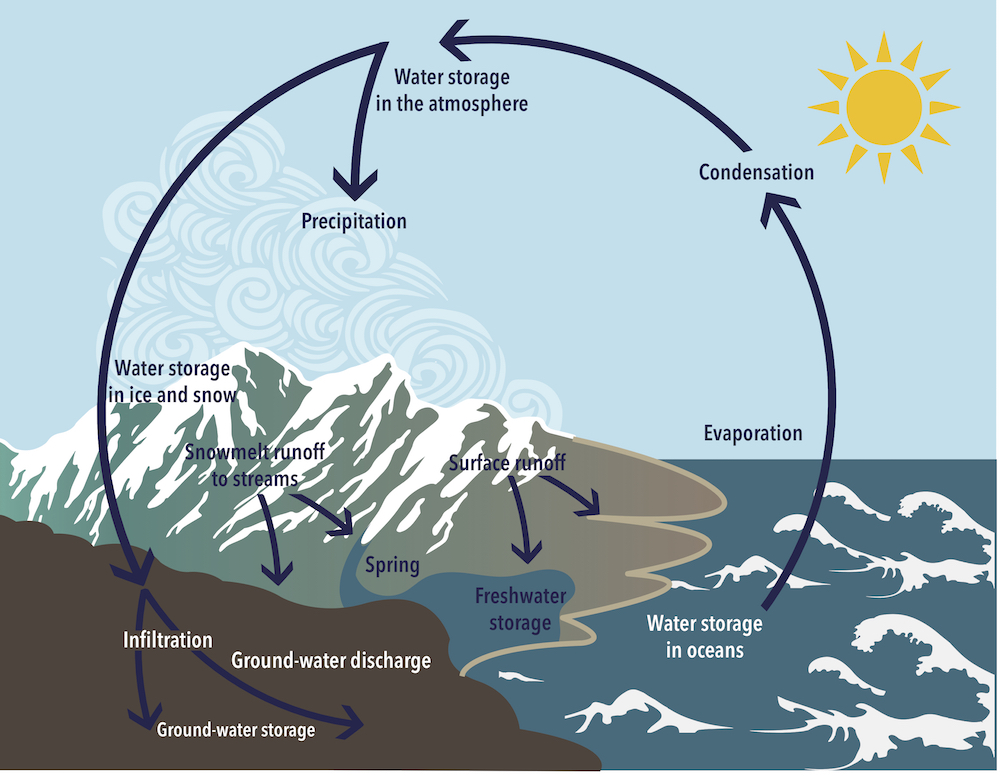 How Water Travels from Oceans to Land and Back

“Kind of,” Julie says. “It does go round and round. But it’s water, not carbon, that goes round and round.” I walk over and look at the picture on the computer screen. “How does it work?” I ask. Julie points to the ocean at the bottom of the picture. “You start here,” she says. “See, you’ve got the sun shining on the ocean. Remember when we heated water on the stove, and it turned into steam? Same thing here. When the sun heats up the ocean, some of the water on top turns into a gas.” She looks over at Tom. “Right, Gas Guy?” “Correct,” says Tom. “That’s called evaporation. And when that water vapor gas gets higher up in the sky, it cools down, and the gas clumps together to make clouds. That’s called condensation.”

When the sun heats the ocean, some of the water turns into water vapor gas.

Julie is bouncing in her chair because she’s really excited. “And here’s the cool part,” she says, pointing to the picture.

“Then the wind blows the clouds over the land, see? When they bump against hills or mountains, the air cools more. The water vapor turns back into water and falls down as rain. That’s called precipitation. It’s like when we put the lid of the pot over the steam, and it turned back into water drops, remember? Isn’t that awesome?”

I can see the clouds in the picture. An arrow shows that they’re traveling from the oceans into the mountains. “What happens to that rain after it falls to the ground?” I ask Julie.

“It runs down the hills into streams and rivers, and then it flows back into the sea!” Her voice rises to a squeak. “That’s the whole idea of a cycle! The water comes up from the ocean and turns into clouds. Then it travels over the land, cools down, and turns into rain. The rain falls into streams and rivers that carry it back to the ocean. It’s a cycle!”

Precipitation is water vapor that turns liquid and falls as rain or snow.

I lean forward to get closer at the picture. “Okay,” I say. “I see the water coming up off the ocean and turning into clouds. Then I see the clouds over the land dropping the rain. And there’s a stream carrying the rainwater back into the ocean.”

Tom also peers at the picture. “The rainwater does some other things, too. Some of it waters the trees, to help them grow. That’s part of photosynthesis—like I was talking about a couple days ago, where the trees eat up carbon from carbon dioxide and give out oxygen for us to breathe.”

“True, Gas Guy,” Julie says, wiggling in her chair. “And some of the water soaks down into the ground until it hits hard rock. Then it runs along the rock underground until it comes to the ocean.”

She stops for a minute to recall what she’s learned. “Oh, wait—sometimes the water bubbles up out of the ground in a spring. That’s called groundwater. It runs into a stream, and then the stream takes it to the ocean.”

She clicks on another link. “Here, I want to show you a water cycle video.”

“That shows it really well, Julie.” But I have another question. “Over in the ocean where we boogie board, the water is salty. But when rivers flow into the ocean, the water they carry is fresh, like the water we drink. It has very little salt in it. What happened to the salt?”

Tom thinks for a minute. “When the surface of the ocean warms up and turns into water vapor gas, that’s the evaporation part. I know that much. It’s easy to remember because the word vapor is part of evaporation. I think that when salt water evaporates and turns into
water vapor, the salt stays in the ocean.”

He nudges Julie. “Let me check it out online.” She slides her chair over, and Tom settles in front of the computer. His fingers fly over the keyboard as he types, When sea water evaporates, what happens to the salt? The answer pops up. The “salt water” doesn’t actually evaporate. The H2O in the salt water solution will evaporate, leaving the dissolved salts behind.

“See—that’s what I thought,” he says. “The salt gets left behind.”

Now Julie gets to show her stuff. “If the salt gets left behind every time ocean water turns into water vapor,” I ask her, “how come the ocean doesn’t get saltier and saltier every day?”

Julie jumps up out of her chair and does her Water Woman dance. “I know! I know!” she exclaims.

“It’s because at the other end of the water cycle, the water running into the ocean is fresh water! It doesn’t have any salt in it. So the salt that gets left behind in the ocean by evaporation mixes with the fresh water coming in, and the ocean stays about the same saltiness.”

“Exactly!” I grin with pride at both of them. “Salt water becomes fresh water, which then becomes salt water again. That’s the cycle!”

I check my watch. “Oops—it’s after nine o’clock, and we haven’t had breakfast yet! I was going to make waffles. How does that sound?

“Delicious!” say Tom and Julie in chorus. They dash off toward the kitchen.